Dear Mum, from your ExMuslim Daughter 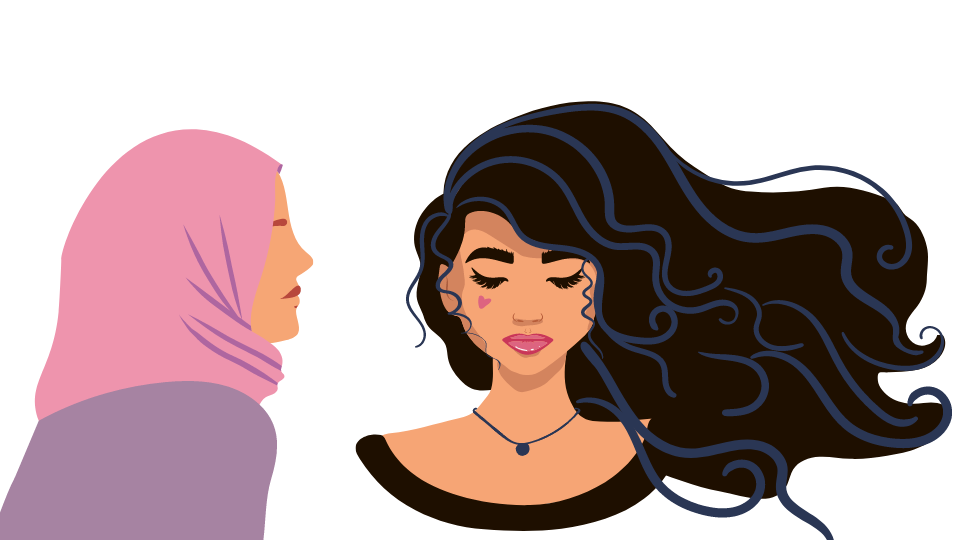 I wish I was able to talk to you honestly about everything that matters to me. I wish I didn’t have to hide so many things from you. But I’ve had to – which has led me to resort to writing this open

letter in hope that another woman will find the strength to deal with and overcome similar struggles.

I often tell myself that it is okay and that some people are just too different to find any sort of middle ground to agree upon, but I also know that this is not how it should be, and I’m sure it’s not the way either one of us wants it to be. You are my mother, the person who I expected to always be there beside me, even when no one else was. The person whose love for me, I believed is incomparable to anyone else’s and to some extent it was true.

As a child I remember facing and overcoming all difficulties together, as a team. Despite of not having the happiest childhood, I look back on our times together with great fondness.

You tried to raise me to be a good, faithful, god-fearing woman, with strong convictions and a steely will, and you succeeded. But as it turns out, these traits are rather contradictory, and I now suffer with major identity crisis.

I am a strong and independent girl, just as you hoped i would be – so why then, were you so appalled by my reaction when I first started hearing about women’s rights in Islam? You taught me that Allah is just and loving, he sees us all as equals and treats us as such, and Islam gave women all their well deserved rights that they were deprived of in Jahiliya, It is what I had been taught and what I fervently believed. Then all that I was hearing about women’s testimonies being half the worth of a man and their need of a male guardian in so many basic situations, must be wrong, right? Surely, that could not be Islam, but only people’s own cultural and personal convictions poisoning their religious ones. When I confronted you with these troublesome doubts, you confirmed what I already knew; Islam is fair, god gave us all our rights and everything else is just culture. Despite of not being satisfied with the answer, I pushed it to the back of my mind, and stopped thinking about it altogether.

Little did I know my insistence on defending women’s rights would cause those questions to arise again, and I would have to face the conflicting nature of my beliefs?

And when they did, I could not ignore them anymore. I am a hardcore feminist, a liberal who believes that all people are equal and deserve equal rights, no exceptions whatsoever. How then could I worship a god that looks down on women as men’s accessories? A god that denies them the simple right to dress themselves freely without the constant fear of judgment and harassment and to use their bodies however they want and in whichever way please them. A god that orders the killing of people only because they refuse to follow the beliefs they inherited from their parents. A god that hates love so much so, he orders the killing of people who love differently than others. It became blatantly clear to me, and there was no way around it: Allah was not great and Islam was far from perfect. I slowly distanced myself from my faith, and of course you noticed. The guilt and shame haunted me –even though I knew I was doing the right thing – add to that your constant chastisement and endless condescending lectures, which offered no real arguments to help me rebuild neither my belief nor offered the comfort and understanding to make me feel better. I felt like I was falling down a rabbit hole, fast, and everything you said kept pushing me down further.

The most difficult thing I ever had to do was facing the falsity of my whole belief system. I had to question things I believed in so strongly for so long, that I build my life upon. Each question lead to another, which had me unraveling the lies and deceits my religion, fed me. At that point, it became impossible for me to believe in Allah.

At first, I could not completely abandon Islam, mostly because it was a major part of my identity. I was a Muslim before anything else. So I clung to it for as long as I could, even though I knew I had to let it go at some point. I considered myself something like a non-religious Muslim. Then that had to go too, and had I not known it before, I knew then: our relationship, or what’s left of it, was doomed.

There was a time when I felt like that before, less than two years before this realisation. I was in a really dark place, my mental health was at its all-time low, I had lost hope in myself and everything else, and was overall an absolute mess. I started self harming which went as far as a failed attempt to suicide, everything around me was falling apart and I was so desperately trying to keep it a secret from everyone, especially you. However, I slipped. And you saw my scars. Do you remember that, mother? I do. I remember it like it were yesterday, when you confronted me, I refused to tell you anything about it. Of course I did, it was MY personal suffering, my problems, and I wanted to deal with them on my own, I did not want anyone to interfere, and you did not. That hurt more than anything. You shrugged it off as if it was nothing, like you often do when faced with a problem, just sweep it under the rug and pretend it isn’t there –you did it with my mental health, my religious beliefs, or lack thereof and I know you’ll do it again with my sexual identity when you find out about it. I can never forget that reaction. Eventually I came out of that dark place, but had to leave so much behind to do so. Our relationship was one of them.

Sadly, that was the beginning of the end for us. In my opinion, our religious differences were not what separated us, they were just one of many irreconcilable differences except that this could not be overcame.

From,
Your ExMuslim Daughter